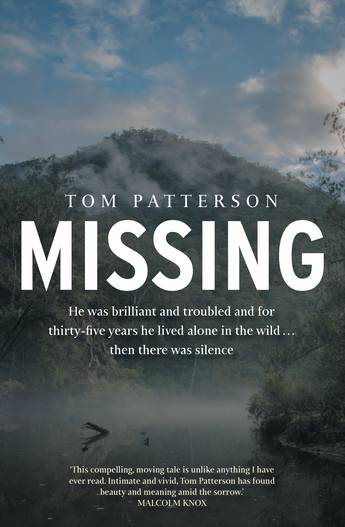 This compelling, moving tale of a singular individual is unlike anything I have ever read. As intimate and vivid as a novel, Tom Patterson has found beauty and meaning amid the sorrow.’ – Malcolm Knox
‘An inside look into an outsiders world, tenderly and beautifully told.’ – Greg Bearup
Hey mate, Pete and Steve have been talking to some people who live around the national park where Mark lives . . . nobody has seen him for months . . . We’re about to head into the gorge . . . I’ll let you know what we find . . .
In 1972 Mark May is eighteen. He is bright, beautiful and has a scholarship to study law. Ten years later he descends alone into remote gorge country in north-western New South Wales. He lives in rough camps and stays for thirty-five years. Then, on a feeling, his brothers go looking for him.

Missing is a true story of immense emotional force. It tells of a broken life and a ruptured family but is also a spare and eloquent story of survival that carries a deep humanity. It announces a significant new talent in Australia writing.