Close
HomeAll EventsAll EventsEventsRichard Denniss – Big: The Role of the...

Richard Denniss – Big: The Role of the State in the Modern Economy 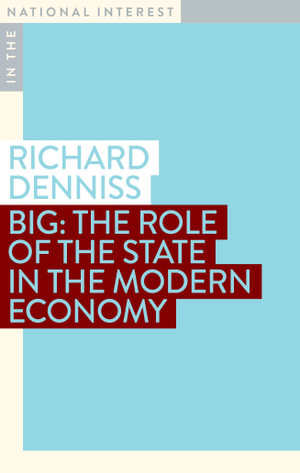 Scott Morrison wants to spend a lot more money on defence, the business community wants more spending on infrastructure and education, an ageing population wants better health and aged care, and young Australians want more action on climate change and affordable housing. Each problem requires more public spending, but for decades Australians have been told that the less government spends, the better their lives will be.

Furthermore, while spending more money will be essential to fund more submarines, aged-care nurses and infrastructure, money alone will not solve the problems faced by Australia. Decades of declining standards of accountability and transparency, of privatisation, deregulation and tax cuts, combined with a lack of energy in strengthening the positive role of government, have led to apathy among the public and parliamentarians. We have allowed our public institutions to shrink and atrophy, and our creativity to wane in choosing not just which services government should provide but how best to provide them.

There is a clear alternative: follow the lead of the Nordic countries in the provision of great public health, education, housing and infrastructure, and in doing so boost economic productivity and deliver higher standards of living at lower cost.

It is time to jettison the obsession with the ‘unfinished reform agenda’ of the 1990s, to consider the breadth and depth of the new challenges confronting Australia, and to chart a course in which governments take more responsibility for solving the problems that will dominate Australian lives in the years ahead. We must abandon decades of denial that the public sector can play a bigger and better role in improving our lives. To build the bigger government these times demand, we must first abandon the baggage of the past.