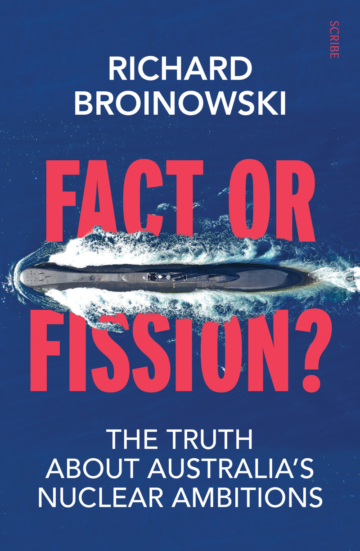 This book examines Australia’s chequered nuclear history – from assisting the United States develop the first atomic bomb in the 1940s, wanting its own nuclear weapons in the 1960s, and then, in sudden reversal,  being at the active forefront of international non-proliferation activities in the 1970s and 1980s. It then examines the consequences of the Morrison government’s decision in 2021 to join the Australia, United Kingdom, United States (AUKUS) alliance.

It does so against continuing public nuclear ambivalence – of outlawing nuclear reactors in Australia while selling Australian uranium abroad. Such ambivalence continues as we continue to support an international non-proliferation regime while being complacent about contributing to the likelihood of nuclear proliferation in our region.

“A pleasure to launch a book by indefatigable former diplomat Richard Broinowski with his deep and continuing interest in Australia’s international personality.  Not all his positions are my positions but in a spirit of promoting debate about vital questions of policy that touch on Australia’s role and personality I am happy to take the stand.  By the way, I see nuclear power is now being promoted by Barnaby Joyce.  This would appear to guarantee that it is going nowhere fast.”