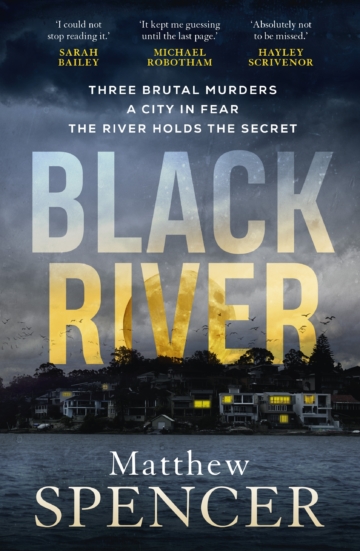 Allen & Unwin are proud to announce the publication of a stunning new crime novel, Black River by Matthew Spencer, on 31st May, 2022. A&U Publishing Director, Tom Gilliatt, says ‘We are so proud to bring Black River to readers.

Matthew Spencer belongs in the same Australian crime pantheon as Jane Harper, Chris Hammer and Christian White, and Black River is going to propel him there.

A CITY IN FEAR

Black River: A long, burning summer in Sydney. A young woman found murdered in the deserted grounds of an elite boarding school. A serial killer preying on victims along the banks of the Parramatta River. A city on edge.

THE RIVER HOLDS THE SECRET

Adam Bowman, a battling journalist who grew up as the son of a teacher at Prince Albert College, might be the only person who can uncover the links between the school murder and the ‘Blue Moon Killer.’ But he will have to
go into the darkest places of his childhood to piece together the clues. Detective Sergeant Rose Riley, meanwhile, is part of the taskforce desperately trying to find the killer before he strikes again. Adam Bowman’s excavation of his past might turn out to be Rose’s biggest trump card or it may bring the whole investigation crashing down and put her own life in danger.

THE MOST COMPELLING THRILLER YOU’LL READ THIS YEAR!

Matthew Spencer was a journalist at The Australian for twenty years, with long stints running the Foreign News desk and as Opinion Editor. He has written for newspapers and magazines in Uganda and Kenya and been published in The Australian Financial Review and The Sydney Morning Herald.

He was born in Parramatta. The son of teachers, he lived with his sister Kate on the 320-acre campus of a boys’ boarding school. Long summers on the largely deserted property while exploring the remnant bush with its tributary of the Parramatta River inspired this book.