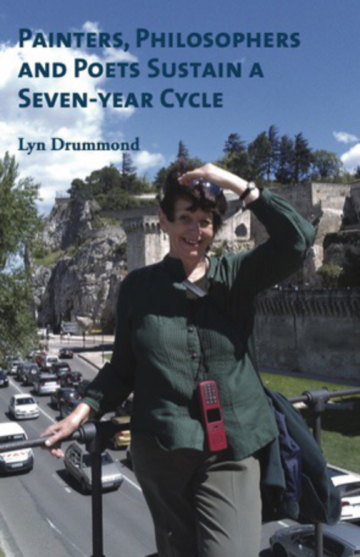 Unlike Lyn Drummond’s previous book, Where To Go For a Seven-year Cycle, which mainly focused on her travels from 2003 to 2010 in Central and Eastern Europe, this companion covering the years 2011 to 2018 highlights more random locations. Painters, Philosophers and Poets Sustain a Seven-year Cycle tells stories of how she shared her footprint with the ghosts of famous people who coincidentally lived in the same places as she did, often eras apart from one another. The books’ titles are based on philosophical views that seven years of our lives represent a particular cycle.

What she learned from some of the people in this book affected her own perspectives. For example, researching the work of seventeenth-century philosopher Baruch Spinoza, who lived near her home in The Hague, resulted in scrutiny of her own beliefs about religion, nature and spirituality. Searching for reasons why Paul Cézanne was so enamoured with Mont Sainte-Victoire, which overlooks the artist’s home city of Aix-en-Provence, triggered strong reactions to compelling landscapes. The book probes the influence American poet Robert Frost had on Edward Thomas, the British poet, essayist and novelist who wrote a poem that struck an evocative chord with a nation on the brink of World War I.

This second memoir delves further into the author’s quest to achieve individuation, a term often associated with Carl Jung and his psychology. Jung believed individuation – a deep understanding of oneself – answers the question of who we really are beneath our responsibilities and social roles, once we face up to our hidden secrets and make peace with our darkest corners. Daring to be ourselves no matter how different we are from others.