Close
HomeAll EventsAnita Heiss – Am I Black Enough For You?

Anita Heiss – Am I Black Enough For You?

In Conversation with Professor Nareen Young 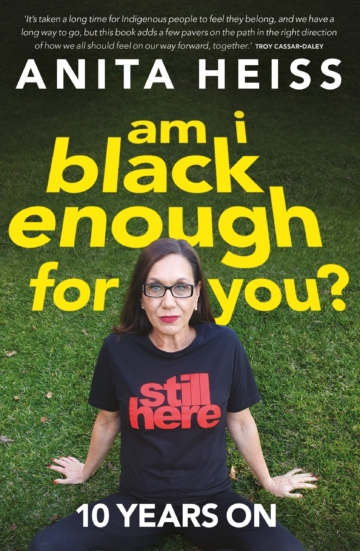 The story of an urban-based high achieving Wiradyuri woman working to break down stereotypes and build bridges between black and white Australia.

I’m Aboriginal. I’m just not the Aboriginal person a lot of people want or expect me to be.

What does it mean to be Aboriginal? Why is Australia so obsessed with notions of identity? Anita Heiss, successful author and passionate advocate for Aboriginal literacy, rights and representation, was born a member of the Wiradyuri nation of central New South Wales but was raised in the suburbs of Sydney and educated at the local Catholic school.

In this heartfelt and revealing memoir, told in her distinctive, wry style, with large doses of humour, Anita Heiss gives a firsthand account of her experiences as a woman with a Wiradyuri mother and Austrian father. Anita explains the development of her activist consciousness, how she strives to be happy and healthy, and the work she undertakes every day to ensure the world she leaves behind will be more equitable and understanding than it is today.

Anita is a proud member of the Wiradyuri nation of central New South Wales and is one of Australia’s most well-known authors, publishing across genres including non-fiction, historical fiction, commercial fiction and children’s fiction.

As an advocate for Indigenous literacy, Anita has worked in remote communities as a role model and encouraging young Indigenous Australians to write their own stories. On an international level she has performed her work and lectured on Aboriginal literature at universities and conferences, consulates and embassies in the USA, Canada, the UK, Tahiti, Fiji, New Caledonia, Spain, Japan, Austria, Germany, China, India and New Zealand. Anita is a Lifetime Ambassador for the Indigenous Literacy Foundation, and a proud Ambassador of Worawa Aboriginal College, the GO Foundation and the Sydney Swans.

Anita loves chocolate, running and being a creative disruptor.